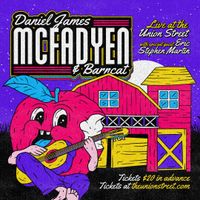 Join Daniel his 5-piece band "Barncat" on the end of his Canadian tour for one night only at the Union Street Cafe in Berwick. When Eric Stephen Martin returned home to Dartmouth, Nova Scotia from a songwriting trip in late February 2020, he was exhausted. The world was shutting it’s eyes in the wake of a pandemic, and an unsuccessful creative journey left him disheartened and alone in his apartment for the first months of spring. It was these isolated conditions in which he wrote the eight songs that make up his first full length album, Dreamlike. Recorded in the dead of 2020, Dreamlike features fellow Dartmouth-area musicians Joel Plaskett, Mo Kenney, and Thomas Stajcer. Martin sings the entirety of the album without harmonies as the band creates warm folk and country inspired soundscapes. His meandering, stream-of-consciousness lyricism wades through the waters of heartbreak, redemption, and hope, being shamelessly self-reflective and heavily influenced by the beat poetry of Jack Kerouac and post-1989 Bob Dylan. Dreamlike trades the humour and irony of modern indie art for a more serious and heartfelt approach.

ECMA nominated folk musician Daniel James McFadyen began his musical journey by playing at humble, bustling pubs in and around the Annapolis Valley. Daniel’s music began to gain publicity and popularity after the release of his single "Goin' Back (The Wolfville Song)", an ode to the small town where he began playing music professionally. Daniel now has two EPs under his belt, and hs most recent album, "August, I'm Yours" has been nominated for the ECMA's Folk Recording of the Year. Originally hailing from Ontario, Daniel James McFadyen found love on the East Coast while on a family trip at 14 years old. "There's something inspiring about the people and culture on the East Coast; it's the most supportive community I have ever encountered." Daniel's upbeat and live performances have consistently sold out across Canada. Daniel spends his free time building a rehearsal space and studio in his barn in the small, charming Village of Port Williams, where he is excited to host community music events and weekly jam sessions. Daniel continues to tour the country with his 4-piece band, The Daniel James McFadyen Band.